Search
Home Blog BEHIND THE WORDS WITH SARA BRUNSVOLD 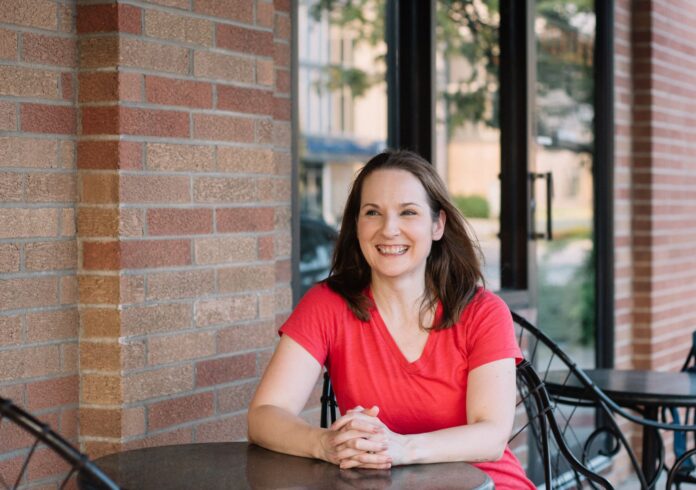 We welcome author Sara Brunsvold to Behind The Words today. Sara is the debut author of “The Extraordinary Deaths of Mrs. Kip,” .

I live with my husband, two daughters and loyal Lhasa Apso in the Kansas City, Missouri, area. As a lifelong Midwesterner, I can’t imagine living anywhere else. It is an underrated section of the country that I love to talk and write about. Interesting fact: I grew up on a dairy farm near Hannibal, Missouri, the boyhood hometown of Mark Twain and the setting for The Adventures of Tom Sawyer.

How long have you been writing and it is your full time job?

I have worked in the corporate communications field for more than a decade. My dream job is novelist, though, and it’s surreal to see that dream come into being. I started writing in middle school, but I started to seriously pursue writing novels in 2012, when I first attended a writers conference. From that point on, I absorbed as much education and coaching as I could, read as much as I could, and wrote as much as I could. It’s been a crazy, blessed ride so far.

My day job is part-time, so I usually have two days a week I can dedicate to writing, considering my girls are in school. To stay as productive as possible on these precious days, I try to set aside certain hours strictly for working on my latest story. The other hours of the day are divided among responding to messages, social media activity, researching, and staying organized. Often, I write at home in the office space tucked into the corner of the bedroom. Some days, though, I need diversity of space to recharge the creativity, so I’ll find a spot at the library, my favorite coffeeshop or my favorite neighborhood park. Coffee is a must regardless of where I write.

My debut novel, The Extraordinary Deaths of Mrs. Kip, is about an unexpected friendship between an elderly hospice patient named Clara Kip and a young reporter named Aidyn Kelley who is assigned to help her prepare an obituary. What Aidyn sees as a throwaway assignment turns out to be life changing in more ways than one. The story is dear to my heart because a key theme is being willing to lay down what you think you want in life for what really matters – a death to self for the sake of something greater. It’s a lesson I was learning myself as I wrote the book.

The story was inspired by two real-life events that came into my purview almost simultaneously. The first was a local hospice facility seeking volunteers to sit at the bedsides of their patients and capture stories from their lives for their loved ones. The second was a piece of real Kansas City history from the post-Vietnam War era, when local churches banded together to help refugees from southeast Asia resettle in the city. That dynamic mashup laid the foundation of the book.

Aidyn Kelley. She was me in so many ways at that age. Fearful of death, aspirations that far outpaced my readiness, inexperienced but desperate to hide that fact. Aidyn also has a good heart that is pliable in the hands of a tender teacher. Like Aidyn, I could sit with Mrs. Kip for hours, drinking in her every word.

Yes, definitely. That applies to both Clara Kip and Aidyn Kelley.

The scenes with the hospice patients nearing their passing took an emotional toll. I still cry reading those scenes. During the research and writing process, I committed myself to presenting the end-of-life stage with both accuracy and dignity. My father-in-law was in hospice care as I wrote this book, and my mother-in-law had passed away in hospice care a handful of years prior. I also interviewed and read the accounts of others who have experience with the end-of-life stage. Writing those scenes called up raw emotion. In the end, though, I believe the willingness to “go there” with the characters made for a stronger story that will bless others.

Clara Kip does comprise bits and pieces of various people I know. A key part of her life story was directly inspired by a family friend, for instance. But she is wholly her own (fictional) person.

No plans for a sequel.

It’s hinted at in the book, but Clara Kip is a huge Elvis Presley fan. She loves him for his music as well as the American culture shake-up he represented.

Are there any particular authors that have influenced how you write ?

My first major influence was John Steinbeck. I devoured his vivid storytelling when I was in high school, starting with The Grapes of Wrath. His focus on the stricken parts of rural America connected instantly to my farm girl existence. A contemporary writer who has influenced me both in the way she writes and in the way she connects with readers is Katherine Reay. I have taken her authoring career advice to heart, and I study her books for technique and style.

My Christian faith is the pillar of my writing. I commit my work to God and do my work as if doing it for Him. I also pray before every writing session for the right words and the wisdom to use them. If I produce anything of value to someone else, it’s because of His guidance.

So many novels fall into the category of under-appreciated. One I read recently that has stuck with me is When the Emperor was Divine by Julie Otsuka. It’s told through the perspective of five Japanese-Americans sent to internment camps during World War II. The book is short but powerful and exquisitely written.

Since childhood, one my favorite ways to unwind is shooting hoops. I don’t play basketball, mind you, but I have a well-honed jumpshot. There is something soothing about the swish of the net after a perfectly arched shot. I can tell the instant the ball leaves my fingertips if it will go in or not.

My comfort food is veggie enchiladas from our family’s favorite Mexican restaurant or gyros from our neighborhood Mediterranean spot. Either meal makes the world seem right again.

Too many ignored household chores. I can’t concentrate when the backlog is too great. Fortunately, doing the chores actually helps nurture creativity. Agatha Christie once said she did her best writing while washing the dishes, so I think we would have gotten along beautifully.

One thing I appreciate being asked is what I wish readers knew about the author life. My answer would be how much it means for readers to reach out personally to an author who wrote something meaningful to them. I float on a cloud for days when I receive a personal email from a reader. Those notes help keep me focused on the bigger picture of why I write.

Thank you so much for joining us today Sara and congratulations on your debut novel!

Here’s a quick look at THE EXTRAORDINARY DEATHS OF MRS. KIP: 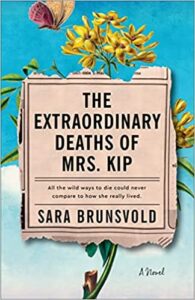 Aidyn Kelley is talented, ambitious, and ready for a more serious assignment than the fluff pieces she’s been getting as a cub reporter for the Kansas City Star. In her eagerness, she pushes too hard, earning herself the menial task of writing an obituary for an unremarkable woman who’s just entered hospice care.

But there’s more to Clara Kip than meets the eye. The spirited septuagenarian may be dying, but she’s not quite ready to cash it in yet. Never one to shy away from an assignment herself, she can see that God brought the young reporter into her life for a reason. And if it’s a story Aidyn Kelley wants, that’s just what Mrs. Kip will give her–but she’s going to have to work for it.

Debut author Sara Brunsvold delights with this emotional multigenerational story that shows that the very best life is made up of thousands of little deaths to self. You’ll want to be just like Mrs. Kip when you grow up!