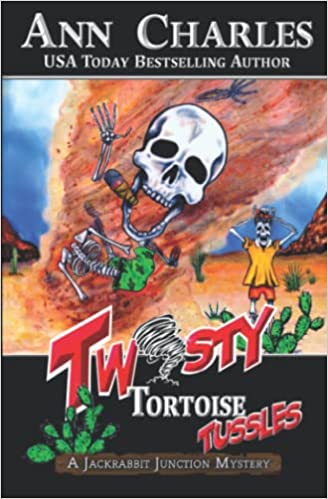 “What kind of trouble are we in now?” – hilarious mysteries well told!

Arizona author Ann Charles earned her degree in English and Creative Writing from the University of Washington and is a prolific novelist specializing in fiction – a blend of romance, mystery, things bizarre, and humor. Her work has been rewarded by not only a large audience of fans, but also with recognition in such awards as The Daphne du Maurier Award for Excellence and the Romance writers of America Golden Heart Award among others. She is a member of Sisters in Crime and Western Writers of America.

The ability to make fine mystery hilarious is a gift Ann Charles owns. Her stories are populated with strange characters whose idiosyncrasies amplify the plot line. The principle characters are the Morgan sisters – Claire, Ronnie, Kate – and this sixth episode opens with the author’s zippy dialogue – ‘Claire zeroed in on Butch. “The mother of your child is up to something.” “Up to what?” “I don’t know exactly, but it’s something that is making her face twitch again.” Butch rubbed his jaw “What conspired prior to this twitch?” “Twitches,” she clarified. Several over a short period of time But I can’t tell you anything more than that.” With that intro the title is defined and the atmosphere of mystery is set for yet another romp with the Morgan girls, again illustrated by CS Kunkle.

The novel is lengthy, but speeds along so well that the interplaying mysteries jump off the page. The stories are distilled as follows: ‘When someone is dead and buried, they’re supposed to stay that way … Aren’t they? Claire Morgan thought so, but now she suspects the dead guy whose treasures she’s been digging up is not only breathing, but spying on her, too. Crap! When someone is divorced from a pain in the a**, they’re supposed to stay that way … At least that’s what Ronnie Morgan had hoped when she dumped her husband. But then he rolled over on some bloodthirsty criminals. With him tucked away in prison, they’ll settle for taking their revenge on her. Fudge! When someone is temporarily insane—Kate Morgan is not crazy, dang it! A few twitches and some mad laughter aside, she has a gut feeling her family is in danger. Big danger. The kind that ends with a lot of blood. Now, it’s her job to keep them alive.’

Having enjoyed Ann’s other books, this is the best one yet! The adventure provides just that sort of diversion we all need on occasion – solid story development ushering in interesting and somewhat askew characters all related with one fine bunch of belly laughs. Read and enjoy!