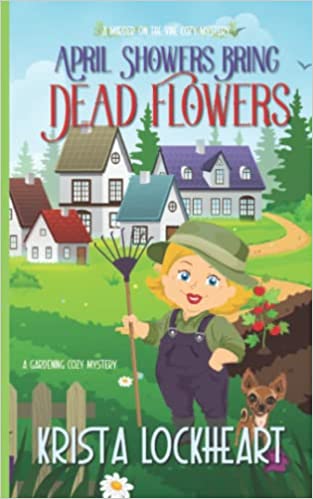 Greenhouse expert and horticulture Professor Heather Moore gets a new lease on life when she inherits her grandparents’ estate in New England.

The garden she loved as a child has seen better days, but she is determined to restore it to its former beauty with the help of her four-legged companions.

Knee deep in soil, Heather digs up an even bigger challenge—human remains.

Since she discovered the remains, she should get to solve the case, right?

It will likely land her in harm’s way with her family’s legacy hanging in the balance.

But as a gardener, she already knows all the dirt, she just needs to solve the puzzle.

To make matters worse, a fellow flower enthusiast, Lars Oslo, walks into her life at the worst time.
He is the man of her dreams, there’s no doubt about it, but can she juggle the case and a new romance?

April Showers Bring Dead Flowers is the first novel in the Murder on the Vine Mysteries series. A clean cozy mystery, with a sweet romance plot and hilarious, and loveable characters.

Perfect for chick-lit fans who enjoy funny, fast-paced plots. Don’t miss out on this breakout novel that will leave you laughing out loud!

Critically acclaimed and award-winning author Krista Lockheart writes irresistible cozy mysteries filled with humor and buzzworthy characters and plots. Her favorite activity is interacting with her readers from all over the world, and she enjoys their feedback and comments on her social media platforms. She loves good food, good conversation, and good books! Cooking is a passion, and she especially enjoys making pasta with vegetables. Chocolate, avocado, and seafood are her favorite foods to celebrate with.

Krista comes from an artistic background, and her art workshops sell out within a few hours of signup. Her work has earned cultural council grants and has been featured in newspapers, magazines, and on TV and on the radio.

In the past few months, her memoir, travel travels, and short stories were published four times in the Writer & Readers’ Magazine, and her travel tale about her expedition to Peru was the editorial feature in DRIFT Travel magazine.

She contributed a short story to a Halloween anthology and her debut novel was #1 in 12 categories on Amazon during its initial release (including in the Free Kindle Store and in new release categories).

It also earned five book awards including First Place at The BookFest in Humorous, a Second Place and Honorable Mention at The BookFest, a First-Place award from Royal Dragonfly Book Awards, and a Silver Award from Literary Titan, along with five star editorial reviews. It was recommended by US Review of Books, and the Chick-Lit Cafe, as well as featured in the Midwest Book Review.