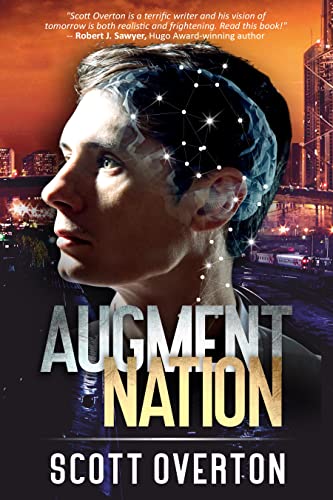 Enhancing our brainpower with computers—is it a Pandora’s Box we don’t dare open?

Sudbury author Scott Overton is offering a cautionary story with his new science fiction novel Augment Nation. The augments referred to in the title are brain-computer interfaces (BCI)—small computerized devices directly linking our brains to powerful processors and even the internet. That’s the direction Overton sees consumer technology going within the next two decades, and we’ll need to be prepared.

Human brains with direct access to the internet. What could go wrong?

Since the age of fourteen Damon Leiter has had a brain-computer interface implanted beneath his skull to correct a neurological disorder. As a teenager, it branded him as an outcast—as an adult it endows him with extraordinary abilities. He may represent the next step in human evolution. When computerized brain augments replace smartphones as the must-have status item, mega-corporations and governments conspire together and marketing becomes mind control. Damon is uniquely equipped to lead a worldwide resistance, but the fight may cost him everything.

“The promise of instant access to lots of computing power and all the resources of the internet with just a thought is incredible,” says Overton. “But the potential risks are staggering too. Computers can be hacked, phones can be hacked…websites, Facebook pages, email accounts; all of them are vulnerable to being taken over or tampered with for malicious purposes.”

But Overton points out that the hazards don’t just involve criminals or vandals. There are hundreds of legitimate players who’d love to have more access to our thinking.

“We already give marketers and companies way too much access to our personal information and our private lives, usually in return for a little extra convenience, reward points we may never cash in, or shiny baubles we don’t need. Who will be able to resist tantalizing offers when an internet connection is right in our head?”

And while Overton thinks conspiracy theories about micro-devices that track us and affect our thoughts are pure fantasy for now, that might not always be the case. Brain-computer interfaces might be just too tempting for unscrupulous political parties or multi-nationals with a lust for power. “I’m sure most of us can think of politicians who would sell their souls for that kind of direct influence over citizens,” he says. “We will have to decide—and decide very soon—whether or not we’re willing to open that door.”

The novel is set only twenty years from now. Is brain-computer interface technology really that advanced?

“Elon Musk’s Neuralink company will soon start human trials to help people who are paralysed or have other neuro-muscular disabilities control electronic devices and robotics with their thoughts. But a company called Synchron is already in human trials,” Overton says.

A well-known radio morning host for more than 30 years in Ontario, Canada, Overton has built a second career as an author. His radio-themed debut novel Dead Air was shortlisted for a Northern Lit Award in 2012, and his science fiction/thriller novels The Primus Labyrinth, Naïda, and The Dispossession of Dylan Knox have been well-received too, with readers most often comparing them to the work of Michael Crichton. The writer considered the “dean of Canadian science fiction”, Robert J. Sawyer, (winner of every major science fiction award and a member of both the Order of Canada and the Order of Ontario) says of Augment Nation:

“Scott Overton is a terrific writer and his vision of tomorrow is both realistic and frightening. Read this book!”– Robert J. Sawyer, Hugo Award-winning author

Augment Nation and all of Overton’s books are available online in eBook and print (find them at your favorite outlet using these universal book links: https://books2read.com/Augment-Nation or https://books2read.com/ScottOverton ). If they are not in stock at your favorite local store, they can be ordered. You can also request most via your local library.