Wednesday – Fun With The Hero of “Collateral Damage”

Heroes have to be HARD, HOT, HEROIC, and a HELL-UVA-LOT. Say what? Before your mind goes wildly running were we dare not tread on a public forum, let me explain. 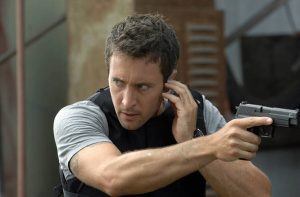 What do I mean by HARD? Hmm. Let’s take a look at Steve McGarrett played by the O’So Sexy, Alex O’Loughlin on Hawaii Five-O. Steve and the hero from Collateral Damage, Jack Hunter, have more than their appearance in common. HARD means the man is strong enough to stand against the danger threatening the world around him. Not just physically strong, but mentally, and emotionally, too. Steve McGarrett and Jack Hunter take on whatever challenge is thrown their way. Sort of like our military heroes and heroines who lay their life on the line every day.

What do I mean by HOT? Well, besides the obvious of being physically attractive which doesn’t necessarily mean Hollywood Perfection. It means the whole well-groomed, educated, humorous, respectful, package. A man who is confident enough in his own skin he doesn’t put others down but builds them up. Do you see this aspect in the fictional characters of Steve and Jack? It shows in the little things they do.

HEROIC? This reaches into the heart of the hero. What motivates him? Which choices he makes at the crucial moments. Steve from Five-O and Jack repeatedly lay everything on the line to do what has to be done to protect others They do it without question and they do without expectation. It is who they are to the core of their beings.

So there you have it. All of my reasons for choosing Alex O’Loughlin’s character Steve McGarrett as being most like Collateral Damage’s hero Jack Hunter. Read a brief excerpt of how Lauren Collins describes Jack Hunter and see who would you choose among the men in the slide show below? Then go to J.L.’s website and you can do the same thing for each of Jenni’s heroes.

Quietly she slipped the chain on and cracked the door open. She was in no mood to be polite. “I’m sorry. I’m not interested in anything you might be selling. There is a no solicitation ordinance in this neighborhood, so I suggest you leave before I call the police.”

“Lauren Collins?” The man faced her and arched an amused brow over his sharply intent green gaze.

Rough didn’t even begin to describe the man’s hard edge, or reveal the almost frightening freshness of the reddened scar on his right temple. His physique and square jaw cut a determined line as did his buzzed black hair and stiff bearing. Military, she thought, immediately reminded of her brother’s demeanor. Her breath caught with hope and trepidation that he was a friend of Jason’s with news.

“I realize this is a difficult time, but I need to speak with you about your deceased husband, Bill Collins. My name is Jack Hunter. I’m stationed at Fort Bragg.” He slipped a business card into the door crack.

Their fingers touched when she took the card and she practically jerked away from the heat that shot up her arm and flushed her face. The man narrowed his gaze at her, intensifying the green of his eyes. His look was almost suspicious.

She blinked and directed her focus to his card. Sergeant First Class meant the man had about twenty years of experience under his belt. Though he wore jeans and a black polo shirt that hugged well-honed muscle and not an official uniform, his boots were the kind a military man preferred.

You will be entered to win an electronic copy of Collateral Damage if you comment here and/or on my website and tell me YOUR choice from the actors in the slide show for Jack Hunter.