If you love a good woman-on-the-run story and a hunky hero check out this sneak peek of Jennifer Zane’s Hot Pursuit. 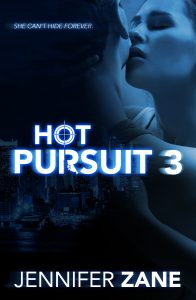 Anna Scott has given Nick everything. Her heart, her body, and the truth about her past. But every action has consequences, and now, thanks to her, Nick is in more trouble than ever. He’s running from his old boss, distracted from his undercover work, and secretly negotiating with the most powerful mafia boss in New York. She knows the only way to free him is to step into the spotlight once more and face her enemies. She is convinced that Nick must stay in the shadows to be safe, but the stubborn man isn’t cooperating. Once she learns the truth about him–that he’s really Jake Griffin–she realizes that his sense of honor and duty will get him killed. Protecting the man she loves is the only thing that matters to her now, no matter the cost.

Jake Griffin is in love with a woman on the run. The woman he knew and fell in love with was an illusion born of desperation. Anna Scott has powerful enemies and blood in her past, but neither can deny the passion between them. Grif will do whatever it takes to help her, including recruiting a notorious killer to help him. Grif will walk the razor’s edge between right and wrong, good and evil, truth and lies, because Anna Scott is everything to him now, and he’ll play any game, take any risk to save her from the monsters in her past, and from herself.

“Your life as you know it will be over. Are you prepared for that?” he added.

I listened to Frank, but looked at Nick. Read from his expression that things were going to be okay. “Yes. I have another life waiting for me.”

Nick arched a brow, no doubt wondering if this new life was as Olivia Edwards or as some new identity.

“So, Nick”—Frank paused, waiting for Nick to look at him—“this took balls…guts coming here like this.” He waved his hand in the air. “You could’ve come here for Moretti, to shoot me in my own home. Your plan, it’s pretty big. Enlisting me to help, even bigger. You could’ve just bought two tickets to Paris to avoid the hit man Monday. Instead, you come up with this scheme so Moretti’s off both your backs. Permanently.” He shifted forward in his chair so his elbows rested on his knees, his fingers steepled together. “The way I figure it, you’re either in love with Anna or you’re a cop.”

Nick froze. I froze. Out of the corner of my eye, I saw Carrie whip her head around to look at her brother.

Nick pivoted his body to face me, his back to Frank. He looked at me with his dark eyes, searched my face. His lip curved up, his dimple appearing. “You’re right, Mr. Carmichael.” Nick’s gaze dropped to my mouth. “I’m in love with Anna—”

I smiled, instantly and brilliantly, tears pricking my eyes. I’d never heard anyone tell me that before. The words were new, rusty to my ears, but the swell of emotion, the overwhelming feeling of joy pumped through my body with every beat of my heart. He loved me. Nick loved me! How had that happened? I’d tried and tried to push him away, keep my distance, to protect myself, my heart from him.

Reaching out, he grabbed my hand and pulled me to him for a quick, rough kiss. It was filled with a tenderness and need I’d never felt before. His hand at the nape of my neck held me in place, even after he pulled back and stared into my eyes. He was breathing hard, his eyes dark.

What? What had he said? My smile fell, but the tears remained, slid down my cheeks. Now they fell out of something other than happiness. “You’re a…” I swallowed past the lump in my throat as I pulled back out of his grip.

“Cop.” Nick took my hand as if he needed a lifeline, but I yanked it away.

What had he said?

Undercover? He didn’t work for Moretti? He hadn’t come to kill me? I’d been waging an internal battle about falling for a guy who had hired hit man and goon on his resume when he was really a police officer? I was smarter than this. The saying love makes you blind was certainly true. Thinking back, the clues were there. Probing questions, knowing where to find me, his friend who had investigated me. Nick had been a cop with me all along.

I stood on shaky legs, looked down at the man who’d just made my life complete in one moment, then ripped it to shreds the next. “I…I’ve got to…I—”

I couldn’t stay here. Embarrassed, shamed and afraid at the same time. Had Carrie known? I flicked my gaze to her. Of course, she had. She sat there looking guilty. She knew her brother didn’t work for Moretti. Knew he was a cop. I thought she was my friend, that she really actually cared about me. No, she just wanted to help her brother.

And Nick… God! All this time, spouting how much I should trust him, how often he’d pushed me to tell him the truth, had been keeping this a secret. He’d lied. Lied. I’d been right, thinking it safer to keep people at a distance. I was right to be wary, paranoid even, of people’s intentions. No one wanted me for just me. They always wanted something.

Nick needed a way out just as much as I did. If Moretti found out he was a cop, he’d hunt Nick forever. So much for protecting me. Nick needed this to save his own skin. Nothing, and no one, else.

Men were all the same. And I’d just spent the last few minutes thinking about how much I loved this one. How honest and true, how freaking trustworthy he was. I was still that stupid eighteen-year-old craving love, needing to feel wanted.

Doing the only thing I could to protect myself, even though my heart had been ripped from my chest and stomped on, I fled. Instead of having another person leave me, use me and then abandon me, this time, I escaped.

Jennifer Zane has lived all over the country–from Georgia to Maryland, New York to Colorado. including an exciting five years in Montana. Her time in Big Sky country was the basis for this book. When she’s not writing, she savors the insanity of raising two boys, is figuring out how many meals she can make with a pressure cooker, and teaches a pretty mean karate class. She currently lives with her family in Colorado.