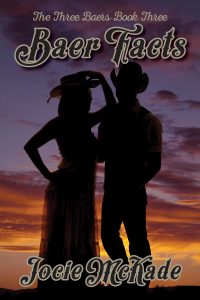 Baer Facts is the third book in the Three Bears Series releases this week with more romance and comedy in Sentinel, Wyoming.

Matt Baer has just been elected the new sheriff of Sentinel, Wyoming. Matt is a man that wants to shake his past, a past that included Ben Childers – the most hated man in the county. Starting a new life with the new job should have been easy — hand out a few speeding tickets, deal with the occasional petty theft, or a few underage teenagers drinking – a pretty calm job. Matt was all set to be a 21st century Andy Taylor in a western version of Mayberry.

Then he found himself in a deserted parking lot with a sword at the back of his neck.

Callenda Smith was dropped into Sentinel by the U.S. Marshal’s as part of the Witness Protection Program. She is a ragin’ Cajun with a fiery temper, and a sister that needs duct taped to a chair to keep her out of trouble and a Russian mob hot off her trail.

Russian mobsters, naked dancers, an overprotective ferret, and two people with very jaded hearts find themselves targeted for very different reasons. Once the dust settles, they just might find their Mayberry.

Sheriff Matt Baer had only taken two steps toward McIvey’s Cafe when the jab of a blade pricked his neck.

His gun, radio, hell, even his pepper spray were in a lock-box in the back of the Expedition. That was a mistake he’d never make again – if he lived through this. Lesson learned, there is no such thing as “off-duty” for a small town sheriff.

The tip of the blade poked into the nape of his neck. The assailant had to be at least six-foot-four or five. Matt was slightly under six-four, so any man capable of putting a knife blade at his neck had to be as tall if not taller. This was looking grimmer by the minute.

“Pervert, I want your arms up and your hands open.”

The pretty, feminine voice sounded pissed. Damn, a six-foot-four inch woman with a blade to his neck, calling him a pervert – this just kept going from bad to worse. Matt tried to glance behind him, but The blade pushed harder against his neck.

“Don’t underestimate my talent with this blade.”

Did he detect an accent? He put his hands in the air. “Ma’am.” He tried to remain calm, which with the way his knees were shaking wasn’t easy. “I am a law enforcement officer.” He swallowed hard. “Do you know what the jail time is for threatening an officer?”

“Not nearly as long as for killing one, I’m sure.” The blade pushed harder. His hands went higher.

Matt scanned the nearly deserted parking lot. He’d worked later than planned, as usual. Now, it was eight o’clock at night, other diners had left, and McIvey’s was near closing time. He was completely on his own.

“Move to the front of the car,” she ordered.

Matt took a step toward the front of the Expedition.

“Now, pervert, I want to know why you’re stalking my sister?”

He started to turn, she pushed the blade deep enough to make him wince with pain.

“Pervert? Stalking? Lady, I don’t know who you think I am or what you think I’ve done, but I’m damn sure no stalker.”

The pressure of her blade relented just enough for Matt to lunge head first across the hood. He heard a rip. The blade sliced through the back of his shirt. Damn, what kind of knife did this woman have?

His lungs nearly collapsed from the impact against the hood. His head slid over the bumper, and he landed on his side in the gravel. Hugging the right front driver tire, unsure if the woman might have a gun too.

Psst! He heard air escaping. Psst! Damn, she was slitting his tires. The woman was a freakin’ socio-path. His heart raced as he looked around the lot, trying to find an escape route.

The tires sounded like dueling hot air balloons falling from the sky.

“You can’t hide pervert,” she yelled.

“Lady, you’re nuts.” That was the best he could come up with? He really did suck as a cop.

Matt Baer wasn’t going to allow some knife welding, female wrestler with a thyroid problem to intimidate him. He was the sheriff, damn it.

Reaching up to the passenger door handle, he pulled. Locked. Lifting his head slightly, he peered through the glass. In the pitch black night, he saw nothing except the faint neon of the McIvey’s open sign. Where had she gone? A woman that big couldn’t hide easily.

He stayed crouched low, using the car for protection. It was a late summer evening, the mountain air just slightly crisp. Crickets and coyotes sounded in the distance; only the gravel under his cowboy boots sounded close.

Coming back toward the front of the car, he grabbed the only weapon he could find: a handful of gravel from the parking lot. Instead of lobbing the gravel into the distance, he remembered his brother Joe’s advice: “most people don’t expect anything to be right in front of them.” With a quiet, gentle arc, he lobbed gravel toward the trunk of the cruiser.

The gravel shifted next to the driver’s door. Good, she didn’t know where he was either. The unexpected flash of headlights showered across the parking lot from a passing car. For a full ten seconds he saw her, and her sword. Sword?

Although the woman wasn’t the hulking, steroid enraged wrestler he’d pictured, she was damned frightening, looking like a medieval sorceress. Roughly five-foot-five, she looked more like a marathon runner – long, lean, and athletic. She wore a billowy kind of outfit, and it looked like she sported a leather bustier, a fact he found oddly attractive.

In her right hand she waved a long, lethal looking sword that could’ve rivaled the fabled Excalibur, and held it pointed directly outward from her.  Only her eyes moved, flashing toward the oncoming headlights.

His first assessment had been right, she was obviously nuts. Only a nut would be brandishing a sword dressed like Zena in the middle of Wyoming.

Matt knew he had about one split second to take her down before she used that sword to slice him to pieces.

He lunged forward, using his full body weight to slam into her, taking her down. The sword sailed out of her hand, the air expelled out of her lungs, and he fell solidly on top of her, pinning her to the ground.

Her knees made contact with his ribs. He let out an ugly grunt. His ribs hadn’t been hurt that bad since a newly neutered bull had slammed him into the wall of a barn. The woman’s legs were like iron.

It took all his strength to keep her pinned. His knees hurt as the gravel tore into them, blood oozed from his elbows trickling down his arm; his shirt now hung open exposing his back, and his groin, well it had a mind of its own. Coming in contact with that tight feminine body, with all her assets pushed up and almost out of that corset top, there wasn’t much he could do to control things.

If he hadn’t slammed her hard to the ground, this woman would have thrown him off and sliced him like a fresh watermelon. Assuming he survived this encounter, he was going to start heading to the gym, daily.

The headlights stopped, resting on the two of them. Matt looked up, feeling an awful lot like an alley cat being a nuisance on someone’s front porch, wondering if the garden hose was going to be turned on them.

The car door opened and a pair of shiny new cowboy boots stopped beside them.

The woman kept fighting, and began cussing him in some unknown tongue. He might not know have known the language, but he knew cussing in any language when he heard it.

For being rather small, the amazingly strong woman had the stamina of a Brahma bull. Matt’s shoulders burned like hell-fire as he struggled to keep his hold on her. Damn, he really hoped whoever wore those boots wasn’t her accomplice, or he was a dead man.

Jocie McKade is an Amazon bestselling author, a freelance writer whose work has appeared in numerous national publications and she writes for several online sites. She lives on what she affectionately (most days it’s affectionate, some days, not so much) calls Dust Bunny Farm. Knocking back a water-tower sized Yerbe Matte tea, with Diesel the Wonder Dog warming her feet, she crafts stories while watching ArnoldSwartzaweeds grow with impunity in her garden.

You can give Jocie a holler at her website or at: