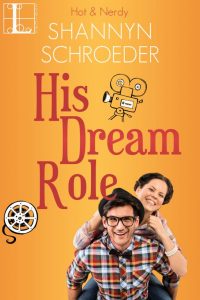 Free Mitchell loves the theater. In his dreams he’s the one taking the spotlight. But so far he’s played against character by following in his father’s footsteps as an investment banker. When he’s masquerading as Dr. Who or Sherlock Holmes to help his brother, he feels he can escape his shy, dorky persona. But nothing’s prepared him to play boyfriend to a gorgeous girl like Samantha Wolf.

Samantha isn’t quite sure what to think of Free. He’s cute, sweet, and quirky, but his outlandish costumes make him seem crazy. However, it turns out Sam has a soft spot for theater nerds. And the more time they spend together, the more their steamy romance begins to take center stage. Only problem is, there doesn’t seem to be a script. And it’s anyone’s guess how this one will end.

Minutes later, when he walked through the door of the coffee shop, Samantha was standing near the entrance. Waiting. For him? He smiled. “Hello again.”

She eyed him up and down, taking in his pin-striped suit and his red Converses. He extended a hand. “I’m the Doctor.”

“Exactly.” He turned toward the register. When the cashier looked at him, he ordered his usual black, no cream, no sugar and a large caramel macchiato for Samantha. As he reached for his wallet, she jumped in front of him.

“I’ve got this. I owe you for the other day.” She paid for the drinks. As she tucked her wallet back into her purse, she turned to face him. “So really, what costume is this?”

She didn’t get it. “Doctor Who. British TV show. Time Lord. Daleks. TARDIS.” He watched her face for any sign of recognition. He found none. Sweeping a hand over himself, he added, “I’m the tenth doctor.” Still nothing.

“I think I’ve heard of it.” She smiled. It was enough to make his day, even if she was clueless about Doctor Who.

When their coffee was ready, he handed her the cup and was at a loss for what was supposed to happen next. He sucked at this.

Samantha pointed toward a table. “I have my books over here if you want to sit.”

“Books! The best weapons in the world!” As soon as he said it, he knew it was a mistake, but once in character, he couldn’t always stop. And the Doctor’s words always sounded better than his own.

Samantha giggled a little. “I agree with the sentiment, maybe even your enthusiasm. It’s one of the things I try to get across to the kids I work with.”

“Kids? Are you a teacher?” He followed her to the table, knowing he couldn’t stay long because he had to go to rehearsal, but he wanted to hear more.

“No. I’m studying to be a social worker, so I volunteer at a shelter for victims of domestic abuse. I see a lot of kids who are utterly hopeless, so I try to give them some hope, teach them that things can be different.” She sat and slid her books toward the edge.

He took the seat across from her and waited. He hoped she would continue the conversation. She sipped from her cup and then licked a bit of foam from her top lip. Free stared at the tip of her tongue and her pink lip, entranced. Then she smiled again.

“You’re in need of books for your kids. What kind?”

“We take anything. I’m working mostly with little kids right now. Hence the paint and glue stuck to me all the time. It’s just that they come to us with so little, except for the number of problems.”

“Books are an excellent escape.” He drank his coffee and thought about where he could get books for her. His mother would know. She knew the ins and outs of many things when it came to charity. “What was your favorite book at that age?”

“The Little Engine That Could.”

Even as a child she was prepared to save other children and make a difference. “Then I guess we’ll have to start with that one, won’t we?”

“Who are you?” she asked, her voice so quiet it was nearly a whisper.

“The hoper of far-flung hopes and the dreamer of improbable dreams.”

She leaned forward and propped her chin in her hand. He became uneasy beneath her scrutiny, so he stood. “I have to get going. I have rehearsal.”

He nodded.  “Until next time.”

You can purchase His Dream Role at:
Kindle
Nook
iBooks
Kobo

Shannyn Schroeder is the author of the O’Leary series, contemporary romances centered around a large Irish-American family in Chicago and the Hot & Nerdy series about 3 nerdy friends finding love. When she’s not wrangling her three kids or writing, she watches a ton of TV and loves to bake cookies.

You can find out more about Shannyn and her books at:
Web site — http://www.shannynschroeder.com
Goodreads — https://www.goodreads.com/author/show/6575201.Shannyn_Schroeder
Twitter — https://twitter.com/SSchroeder_
Facebook — https://www.facebook.com/shannyn.schroeder