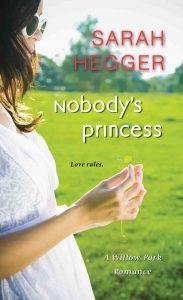 Sarah Hegger is back with another delightful Willow Park Romance, but this time the road to love might be a little bumpy…

Tiffany Desjardins has a plan. Well, she had a plan, until her past and all its complications came back to haunt her. Her not-quite-ex-husband, Luke, is missing, and suddenly everyone needs to find him–including Tiffany, if she wants to marry the true man of her dreams. Then there’s Thomas Hunter, Luke’s brawny friend, who won’t take “no road trip” for an answer–and who won’t stop showing up in her daydreams…

Thomas couldn’t care less about Luke’s personal life, but he needs to find him if he’s going to make his fledgling minerals and metals company a reality. And if that means following Tiffany, who’s taken off in Luke’s rare Lamborghini Miura, he’s more than willing–especially if there might be a chance to negotiate some of Tiffany’s lovely curves. As Tiffany and Thomas speed along without a map, the only destination that seems certain is being together…

“Sarah Hegger’s voice is rich and witty and in a word, addictive.”–Terri Osburn, author of the bestselling Anchor Island series

“Is that the casting agent?” Piers demanded.

“No.” Tiffany glared as Lola’s name lit up her screen. The woman’s timing couldn’t suck more. As much as she needed to speak to Lola—and she really, really needed to speak to her—she didn’t want to answer the call now. Five days she’d waited for Lola to call back. Lola pretty much ignored every call she didn’t feel like taking. Conversely, when Lola wanted to speak to you, she wanted it now and would blow up your phone until she got hold of you.

She hit Ignore and slipped the phone into her pocket. Why today of all days? It must be some kind of cosmic joke. Could you calculate coincidence? You must be able to. Nearly everything broke down to numbers in the end. Her gaze strayed toward the tote again. Her book seemed to shimmer and pulse for attention. Perhaps she could just quickly . . .

“Hi, I’m looking for Tiffany?” A deep voice spoke from behind her. 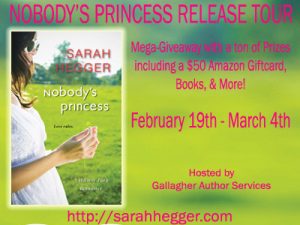 Tiffany whirled on her four-inch heels and looked up. And up some more. Oh, thank you, sweet Jesus. Her white boy was here and he was gorgeous. His blond hair was cropped close to his scalp. It brought all your attention straight to that face. And what a face. You could break rocks on that jawline. The straight blade of his nose rescued him from pretty, but the mouth beneath it curved full and etched, made for nibbling on.

Tiffany did a quick, happy two-step. He even had beautiful blue eyes. He might be a shade on the tall side, but they could fake that a bit. Not as young as she’d first thought, but makeup would fix that. Two vertical lines between his eyebrows gave off a sort of don’t mess with me vibe. She beamed at him. “You’re perfect.”

He raised an eyebrow, and returned her smile cautiously.

Oh, yes, yes, yes. He had one of those smiles, all innocent on the outside until you looked into those bad-boy eyes. Scrap the Botox, those laugh lines were smoking hot. She did a quick body scan. Nice. Very nice. If he looked as good out of that tight T-shirt as he did in it. Seriously, where had this boy been hiding himself?

Tiffany patted the sort of forearm that could be best friends with a jackhammer, and mentally forgave the casting agent. “Okay.” She stretched her fingers to capacity to grip his arm. Wow! And this from a girl who worked with wow every day. “We are going to have to hurry. Strip and let’s get you all pumped up.”

“Where the hell have you been?” Piers snarled. “Your call time was one thirty.”

Blondie opened his mouth to reply. Tiffany spun him toward makeup. No good arguing with Piers when he was on a tear. A waste of time they didn’t have. Things were turning around. The white boy was here, and he was gorgeous. The shoot would finish on time, and then she could deal with Lola. And still have time to prepare herself for the night.

Blondie stood there giving the other models a thorough eye scan. Gay. What a shame.

She shook her head at herself. What did it matter? She was practically an engaged woman.

Blondie hovered at her side.

Clichés sucked, but some of these boys had no brain beneath all that brawn. Hooking her hands beneath the hem of his T-shirt, she tugged. “You have to take this off for makeup.”

“Are you taking my clothes off?” Blondie folded his huge paws around hers and stopped her. He had a great voice, like hot chocolate laced with rum. The sort of voice that would do great bedtime stories.

She hauled back on her thought path. “You have to strip.”

He looked right at her. Not past her or around her, but right at her as if he wanted to see straight into the center of her.

“Strip?” Up went one eyebrow.

Something she didn’t want to name crackled through the space between them. Sweat prickled her palms. Her hands were still fisted around his shirt, exposing about two inches of stomach. He had a garden path trail of hair disappearing below the low-slung waist of his jeans. That would have to go. Pity. Tiffany dragged her stare off his navel and focused on the writing on the front of his T-shirt: Never trust an atom—they make up everything.

Cool shirt. She and Blondie were probably the only two people in the world who thought it was funny. “Yes, strip.”

She pulled at the shirt and his hands tightened over hers. Tiffany glared up at him. Following up on late with an attack of modesty? Unbelievable. Did he think he would be modeling undershirts and long johns? “You have to take it all off.”

“Normally I get dinner first.” Those bad-boy eyes danced at her, inviting her to share the joke. For a second, she badly wanted to.

“Tiffany, sweetie.” Tyrone appeared beside her. “That’s not your model.”

“What?” Tiffany stared at Blondie. Of course he was her model, because otherwise she was stripping . . . A whimper caught in her throat.

He looked back at her.

Tyrone took her by the shoulders and spun her around. “That’s your model.”

He pointed to a beautiful Rocky (as in the Picture Show, not Sly) look-alike talking earnestly to Piers. Piers lapped it up, waving one hand through the air and patting the pretty blond boy on the arm.

“I . . .” Tiffany peered over her shoulder. Please let the last two minutes be a figment of her imagination. Her figment grinned at her and tucked his hands into his back pockets. 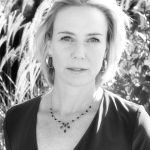 Born British and raised in South Africa, Sarah Hegger suffers from an incurable case of wanderlust. Her match? A hot Canadian engineer, whose marriage proposal she accepted six short weeks after they first met. Together they’ve made homes in seven different cities across three different continents (and back again once or twice). If only it made her multilingual, but the best she can manage is idiosyncratic English, fluent Afrikaans, conversant Russian, pigeon Portuguese, even worse Zulu and enough French to get herself into trouble.

Mimicking her globe trotting adventures, Sarah’s career path began as a gainfully employed actress, drifted into public relations, settled a moment in advertising, and eventually took root in the fertile soil of her first love, writing. She also moonlights as a wife and mother.

She loves to hear from readers and you can find her at any of the places below.