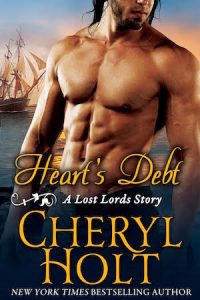 CHERYL HOLT tantalized readers around the globe with her Lost Lords of Radcliffe trilogy. She continues to dazzle with yet another story from the trilogy. In the three novels, no character was more fascinating or intriguing than the mysterious Mr. Drummond…

DAMIAN DRUMMOND had his life ruined when he was wrongly convicted of a crime and sent to the penal colonies in Australia. He survived the ordeal by dreaming of the vengeance he would one day extract from those who’d wronged him. With his sentence complete, he’s grown incredibly wealthy through criminal enterprise, and he’s returned to England, intent on revenge. He begins by buying the bankrupt Kirkwood estate from the wastrel and gambler who betrayed him…

GEORGINA FOGARTY has never been anything but a poor relative. She grew up at Kirkwood with her rich, spoiled cousins. Though she’s worked hard to earn their favor and show her gratitude, she’s never felt welcome or appreciated. When Damian arrives and announces he owns Kirkwood, that her cousin has gambled it away, Georgina is willing to make any sacrifice to save her family’s home. But when she begs Damian for mercy, she has no idea of the high price he will insist she pay…

EXCERPT:
CHAPTER ONE
Kirkwood estate, rural England, July, 1815…Georgina Fogarty strolled down the lane that led to Kirkwood Manor. It was a beautiful summer afternoon, and for once she felt lazy and unencumbered and under no obligation but to plod along and enjoy the weather. Normally after she visited acquaintances in the village, she’d regret the minutes she’d taken for herself. She’d hurry home so she could resume her duties and continue her fruitless quest to prove herself worthy to her aunt and cousins. She’d been trying for almost twenty years, and she couldn’t figure out why she bothered. Her kin were spoiled and self-centered, the three of them too vain to notice whether she worked hard or not, whether she made their lives easier or not. No, they only noticed when she didn’t finish a task, when she didn’t complete a chore that desperately needed completing. Then she was berated as if she was their personal slave, and in light of how she was constantly maligned and criticized, she might have been Cinderella. If she’d had less confidence or common sense, she might have bemoaned her plight. But she didn’t ever complain. For the most part, she was content with her lot, although she had to admit that she’d love to shuck off her responsibilities and observe from afar as Kirkwood imploded without her skilled guidance. Whenever she was exceedingly aggravated—which was nearly always—she’d imagine the havoc that would ensue if she walked away. It gave her great satisfaction to envision it. Yet she would never behave so badly. She was possessed of her deceased mother’s negligence and wanderlust so unnatural urges flowed in her veins, and she was careful that she never succumbed to a single rash impulse.She came to the bridge over the stream that meandered through the estate, and she stopped in the middle. Down below, wildflowers covered the banks, and she decided to climb down and pick a bouquet. A sandy spot was visible, and for a brash moment, she thought she’d remove her shoes, hike up the hem of her skirt, and go wading. It was a hot day and there was no one to see. Why not indulge? If passersby approached, she could hide in the trees until they left. There was a path in the grass, and she tromped down it to the water’s edge. After dipping in her fingers, she found it much colder than she’d expected, but with her already being tantalized by the prospect of wading, she was undeterred. She untied the ribbon on her bonnet and set it on the ground, then she plopped down and began to unbuckle her shoes. But when she wasn’t looking, a breeze caught the bonnet and blew it into the stream. Though she lunged for it, she couldn’t grab onto the ribbon, and it drifted off. She scrambled to her knees, extending out, desperate to retrieve it. She was never short of clothes, but as her Aunt Augusta frequently reminded her, she was the poor relative and charity case who never had money to purchase her own garments. Her cousin, Sophia, though was a flagrant shopper who offered Georgina her castoff attire. While the gesture was always kindly made, Georgina was irked that her wardrobe contained the items Sophia no longer wanted. She couldn’t lose her bonnet! It would mean having to ask Sophia for another, and Georgina tried to never ask her cousin for anything. Stretching out even farther, she only managed to slip off the bank, her knee sliding into the water so a good portion of her skirt was wet, an arm and sleeve too. “Drat it!” she muttered.

Once she was back at the manor, it would be impossible to explain her sodden condition. Aunt Augusta was a fussy, finicky stickler for the proprieties, and Georgina would never hear the end of it. She pushed herself to her feet, prepared to chase after her bonnet, when she noticed a man standing under the bridge, his horse quietly positioned behind him. They were both staring at her, their attention curious and extreme. The man was dressed all in black. His coat, trousers, and boots were black, his hair too. His horse was black, his saddle and gear black so he blended into the shadows. He was still as a statue, having assumed such a tranquil pose that he might have been carved from stone. She had to blink several times to be sure he was actually there and not a hallucination. But he was real and scrutinizing her with the intensity of a hawk about to swoop down on its prey. He didn’t seem threatening, but it was an unnerving encounter nonetheless. She was totally alone so he could do any horrid thing to her without consequence. She ordered herself to run off, but she was locked in place, his steady gaze holding her rapt. Then suddenly he moved, but not toward her.

You can purchase Hearts Debt at:
Amazon
Kobo
Apple 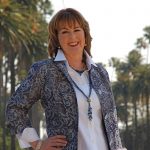 CHERYL HOLT is a New York Times, USA Today, and Amazon “Top 100” bestselling author who has published over forty novels. She’s also a lawyer and mom, and at age forty, with two babies at home, she started a new career as a commercial fiction writer. She’d hoped to be a suspense novelist, but couldn’t sell any of her manuscripts, so she ended up taking a detour into romance where she was stunned to discover that she has a knack for writing some of the world’s greatest love stories.