SNEAK PEEK: ONE HOT SUMMER (One and Only Texas #1) by Melissa Cutler 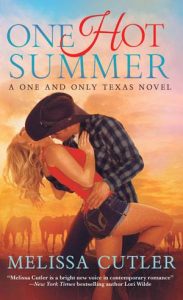 ONE HOT SUMMER (One and Only Texas #1) by Melissa Cutler

Welcome to Dulcet, Texas, home of the legendary Briscoe Ranch Resort, where one woman will discover that even love is bigger in the Lone Star State.

Celebrity wedding planner Remedy Lane is Hollywood royalty—until a scandal sends her packing to the wilds of Texas. She has a knack for leaving disaster in her wake, but she’s determined to reboot her career at Briscoe Ranch, a luxury resort known for extravagant weddings. Little does she know that weddings don’t happen at the resort without the approval of the town’s cowboy-swaggering, too-hot-for-his-own-good fire chief, Micah Garrity.

ONE HOT SUMMER
Micah knows trouble when he sees it, and all it takes is one glimpse of Remedy’s princess airs for him to know he’s met his match. Too bad he can’t stop thinking about her—even when she brings about one disaster after another at the resort. He and Remedy clash at every turn, but they can’t stop the sparks flying between them. They come from such different worlds—does love stand a chance or will this fire burn too hot for either of them to handle?

“How is it that you have the power to wrap every man you see around your little finger?” Micah said, nodding to the groomsmen in the distance.

“Except you,” Remedy tossed out with a shrug.

“I’m impervious to your feminine wiles. Unlike those half- wit groomsmen.”

With a wry smile, she ran her hands down her dress. “Look at me. I’m unobtainable and dressed like a virgin librarian. All those guys you saw want to be the one man with the macho power to corrupt my innocence and introduce me to the world’s many wicked pleasures.”

He laughed at the deprecating self- descriptor. Yeah, her getup was drab as hell, but still, a virgin librarian she was not. “It’s a good thing they didn’t see you prancing around in that bikini at the picnic at the river or they’d realize they’re the ones in danger of being corrupted by your wicked ways.”

An image rolled through his mind about the way her water- slick, tanned curves had writhed and bounced as Chet and Dusty had dragged her into the river shallows and tried to teach her how to two- step. Shifting, his body turning restless, he locked his jaw and set his focus on the stars lifting up from the dark silhouettes of the hilltops.

He could not have this woman. He had rules against that kind of fraternization for a reason.

Her voice cut through his self- flagellation. “Are you making a crack about my virtue? Because my virtue happens to love this season’s Dolce & Gabbana swimwear collection, thank you very much.”

That was the most ridiculous sentence he’d heard uttered outside of his TV set. He pinched the bridge of his nose against smiling, but a snort of laughter still managed to escape. Man, was she out of place in Ravel County. He flicked a glance in her direction, valiantly fighting the urge— and failing—to rake his gaze over her body. “Don’t get me started about how those itty- bitty pieces of fabric you were wearing at the river threatened to corrupt my virtue.”

He braced himself for a witty retort or scathing commentary on the irredeemable nature of his virtue, but she didn’t take the softball pitch he’d tossed her. From the corner of his eye he watched her shoulders lift as she inhaled deeply.

On a purr of an exhale, she smiled, triumphant. “Mmm. Chief Garrity, I love knowing how much that bothered you.”

The huskiness in her voice stripped him of all control. Done fighting the urge to drink his fill of her, he tore his gaze from the horizon, but all he caught was her trademark sashay as she left him in her dust and walked into the tent. Whistling under his breath, he spun away from the reception and started back toward his truck. Time for him to get the hell out of California’s orbit before he lost his careful control and fell into rank with the groomsmen trailing behind her like a pack of fools. 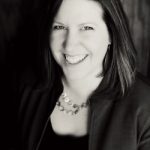 Melissa Cutler knows she has the best job in the world, dividing her time between her dual passions for writing sexy small town contemporary romances, western romances, and edge-of-your-seat romantic suspense for a variety of publishers, including Harlequin, Kensington Books, Penguin, and Macmillan. She was struck at an early age by an unrelenting travel bug and is probably planning her next vacation as you read this. When she’s not globetrotting, she’s enjoying Southern California’s flip-flop wearing weather and wrangling two rambunctious kids. Find out more about Melissa and her books at www.melissacutler.net  or write to her at melissa@melissacutler.net  . You can also find Melissa on Facebook (www.facebook.com/MelissaCutlerBooks ) and Twitter (@m_cutler)

You can purchase One Hot Summer at: