SNEAK PEEK: The Thief by Michele Hauf and How Her Career Might Have Been Different 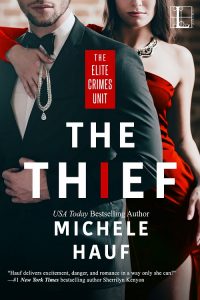 If I hadn’t become a writer I would have had two career choices: Brain surgeon or jewel thief.

I feel quite certain both professions aren’t too upset I instead decided to go with the words on the page option.

When I’m not writing fiction, I read a lot of non-fiction, and am always attracted to anything and everything on the brain or how to get away with a heist. I mean seriously, how cool is it to learn about neurological disorders and how the brain can be damaged yet survive and even change a person’s life for the better (but not always)? Or if the intricacies of the meninges and the Circle of Willis don’t catch my interest I pick up a guide on cracking safes, or picking locks. Can I admit I have my own lockpicking set? I use it only as a hobby. (Because honestly, I haven’t been able to crack the front door lock yet, so how do you think I’d actually be out in the real world?)  😉

There is something so sexy about a thief in an expensive suit, walking into a crowded ballroom and assessing each and every person for the ease and value his attention to them would return. A strand of diamonds around a woman’s neck? Who is she talking to? Does she have a lover on her arm? Is her hair long enough to hide his actions? Might she take to his flirtations for the few moments required to pocket the jewels?

I’ve written about jewel thieves before but this story, THE THIEF, is the first time I pit two professional thieves against one another. And, oh, such fun I had. There’s action, adventure, some sexy hijinks, and don’t forget Chloe, the strange cat who might be the force who keeps them together, despite the odds.

The Thief by Michele Hauf

“Hauf delivers excitement, danger, and romance in a way only she can!” —#1 New York Times bestselling author Sherrilyn Kenyon

The Elite Crimes Unit works behind the scenes of Interpol—and employs some of the world’s most talented criminal minds. Because as everyone knows, it takes a thief to catch a thief—or to seduce one . . .

The old farmhouse in the French countryside is a refuge for former jewel thief Josephine Deveraux. Admittedly, there aren’t many men in the vicinity, but she has her cat to cuddle up with. It’s a far cry from her former life, constantly running from the law, and she’s enjoying her peace . . . until the intruder in the three-piece suit tackles her. He wants her back in the game, helping with a heist—and he’s not above making threats to get his way.

Little does Josephine know that notorious—and notoriously charming—thief, Xavier Lambert, is after the very same 180-carat prize she’s being blackmailed to steal. To his chagrin, he’s doing it not as a free agent, but as a member of the Elite Crimes Unit—the team he was forced to join when his brilliant career came to a sudden end. And little does Xavier know that his comeback is about to include a stranger’s kiss, a stinging slap, and a hunt for missing treasure—along with the infuriatingly sexy woman who’s outfoxing him . . .

You can purchase THE THIEF at:
Kensington Books 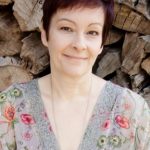 Michele Hauf has been writing romance, action-adventure and fantasy stories for over twenty years. Her first published novel was Dark Rapture (Zebra). France, musketeers, vampires and faeries populate her stories. And if she followed the adage “write what you know,” all her stories would have snow in them. Fortunately, she steps beyond her comfort zone and writes about countries she has never visited and of creatures she has never seen.

BEHIND THE WORDS welcomes Jill Eileen Smith. We’re excited to have you on Reader’s Entertainment. First, tell our readers a bit about yourself. Where...
Read more