SNEAK PEEK: Sets Appeal by Virginia Taylor and The Set Designs that Inspired Her 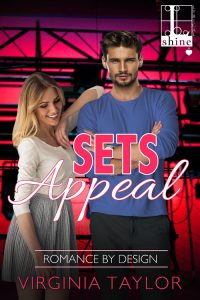 There I was, years ago, removing zippers from used costumes, bored out of my brain, when a whole lot of motivated people dressed in paint-stained clothes arrived in the church hall. Long canvas-covered frames were placed on the backs of chairs while they talked among themselves. I had volunteered to help in the costume department of a theatre company after my chosen profession of romance writing turned out to be a dud.

I watched the painters dither around and then the set designer arrived. He started explaining what he wanted done. From where I sat, I could see they didn’t understand his instructions for rag rolling. No one appeared to understand no matter how many times he showed each person. I had the idea I knew him from somewhere.

My fingers itched. I rolled up the zippers I had reclaimed and wandered over to the painting area. I knew what he wanted, and I said so. He gave me a look of impatience, but I took a rag and began on a new flat. He watched me in silence for a while and then he called everyone over and said, “this is what I want.” In an instant, he moved everyone else to another job, which they also performed enthusiastically, while I painted out the previous mess and ended up doing every single flat myself. 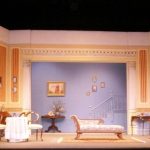 He said, “Do I know you?” We worked out that he was in the fine arts stream at Art School when I was in the commercial stream. We dropped a few names and related a few histories and then he got me to do some colour mixing for him. Turns out I have a talent for deconstructing and putting together colours.

In the next few months I learned how to do special effects like wood grain, tortoiseshell, lapis, marble, granite, you name it. I could colour or texture match anything given to me and we finished off the set with me learning whatever I could from the master. During the time I had married and produced a couple of gorgeous daughters, he had been working for a big ballet company as the set designer. He also designed costumes brilliantly. That’s not my thing but I turned out to be good with hair and hats.

Working together after he had taught me the basics of set design, we won all sort of awards and made our name as a team. I was the approachable half. If a director pitched to me, and I liked the idea, we usually did the set, but we had to have the rights to the hair and costumes as well. And then his dentist noticed something suss in his mouth. He died about a year later.

I went on designing and painting sets, but without him it was too hard. I aimed for perfection but two worked better 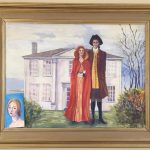 However, I used this time working on theatre sets to inspire Sets Appeal.

For the story I used a set that I had painted, that of High Society. In those days I had a primitive camera, which means that most of the photos weren’t worth saving. Apologies for the graininess. I have also included here my painting of the Miss Muffet cupboard that I talked about in the book. 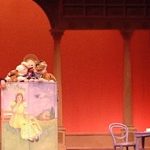 Other than that, I have included the photo of the set I did alone for Washington Square. The painting was hung on the back of the set and the woman’s head in the corner was on the mantelpiece in  silver frame. Heaven knows why I kept these two pieces. I also made the fainting couch, since I couldn’t find one. Some of these props couldn’t be seen by the audience but the actors always appreciated a bit of ‘scene’ setting.

In the cosmopolitan coastal city of Adelaide in South Australia, two theater lovers create a little drama of their own…

Twenty-seven-year-old divorcée Vix Tremain finally has her first job—as a theater-set painter—and is ready to leave the past behind. What better way to get her confidence back than a fling with a handsome stranger? She isn’t looking for anything emotional, she’s had enough heartbreak. Rugged Jay Dee, the set construction manager, fits the bill for no strings fun perfectly. What Vix doesn’t realize is that Jay is not exactly a stranger . .

You can purchase SETS APPEAL at:
Kensington Books 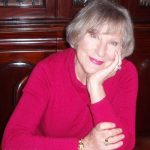 After training at the South Australian School of Art, Virginia worked in an advertising agency. This segued into re-training as a nurse/midwife before meeting the man of her dreams, marrying and producing two children.

Over the years Virginia has been a theatre set painter and designer, but now she fills her days as a full-time writer.