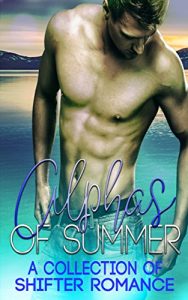 When thirteen bestselling authors come together to form a boxed set of sizzling paranormal novellas, you bet it’s going to make for an amazing read!

I asked each of the thirteen authors to describe their hero and to tell you his best attribute.  It’s always fun to get to know these sexy alphas!!

The hottest collection of 13 shifter novellas you’ll ever own. Wolves, leopards, bears, dragons, humans, mutants, and plenty of ALPHA MALES, Oh my!

Turn up your AC and break out the ice baths. Summer just got a whole lot hotter with this collection of 13 hot alpha shifter novellas.

13 USA Today, and International bestselling authors have joined together to offer a can’t-be-missed line up of summer heat.

is Best Attribute?  He’s a superhero who risks his life everyday to keep everyone safe. His superpower allows him to merge into and travel through solid material. Instead of driving a car, he sinks into the ground and zip zip zips to wherever he wants to go. He can hide in the walls of a house to see and hear what is happening inside. That’s why he’s called “Ghost.”

What does he look like: Tall, dark hair, and blue eyes. Prefers dark blue three-piece suits when he’s working at his “other” job as a private detective.

His Best Attribute? He is the reigning prince of the Shifters and next for the throne. He is the CEO of the Le Beau Corporation. With that said, he also rides a Harley. He’s a alpha male but also a true romantic and loves to give the love of his life surprises. The surprise’s get him in a heap of trouble in this story.

What does he look like?  Dark brown, long and wavy hair, with golden natural highlights, pulled back into a sexy ponytail.

He prefers jeans, T-shirts and biker boot over a suit though he will wear one if needed.

His Best Attribute? He’s a cowboy who is loyal to his pack.

What does he look like? Green eyes, brown hair, wears a cowboy hat, jeans, and boots

His Best Attribute? He’s an idealist; the thing he wants the most (except take care of his true mate) is to make a positive difference in the world.

What does he look like? 6’6″ (bear shifter, so he’s very tall and built), muscular, broad shouldered, brown hair and eyes.

His Best Attribute? He doesn’t give up until he gets what he wants.

What does he look like? Tall, dark and handsome of course!  He has dark hair, chocolate brown eyes, broad and muscular and tall. Basically- he looks exactly like a cover model.

His Best Attribute? Caleb Marsh is a company man who will do anything to bring criminals to justice but has a tender heart for anyone in need.

What does he look like? Caleb has jaw length black hair and a tanned complexion. He is muscular with wide shoulders, and a narrow waist.

Book Title: In the Cover of Night by Tigris Eden

His best attribute? He cooks, he’s good with his hands, and he has very expressive eyes.

What does he look like? Six feet tall, black hair and teal colored eyes, and both arms are covered in tattoos.

His Best Attribute?  A born leader in the Spartan army, this immortal is strong and loyal.  He stands by his word and on top of that, he’s medically trained and cares about saving lives.

What does he look like?  Six feet six inches with long silver blond hair.  He has silver eyes with a strong jawline.  Roderick is a muscular guy who dresses in black jeans, leather jacket and wears Doc Martens.

His Best Attribute? His willingness to go outside the box and open his eyes to see things differently.

What does he look like? Tall, black hair that brushes his shoulders, green eyes and mischievous.

His Best Attribute? His moral compass; he has a strong sense of right and will put his own desires aside to do the right thing

What Does he look like? Tall and broad shouldered; coppery-tan skin and thick dark hair

His best attribute? His capacity to love and go to the ends of the earth for his family (single dad)

What does he look like? Raven hair, piercing green eyes, 6’5″ Rugby player build, chiseled features (because he’s a dragon!)

His best attribute? He’s an alpha male mated to an alpha female, he knows when not to push. He’s compassionate and a loving father to his adopted daughter.

What does he look like? In human form, Cooper is tall, muscular with brown hair and green eyes. In wolf form, his coat is a shiny jet black with the same green eyes.

His best attribute? His leadership as a fair, strong and understanding alpha.

What does he look like? 6’5”, Svelte muscular body, blue eyes and long blond hair.

Into The Night An imaginative debut collection by author and educator, Caroline Giammanco People who aren’t exactly as they seem. Familiar places transformed into sinister voids of...