Romance and Romantic Suspense to Heat Up Your Summer 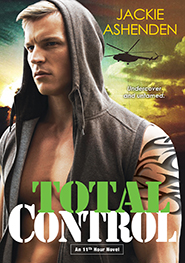 Once they were soldiers. Now they answer only to honor . . .

The 11th Hour is made up of men and women who are no longer deemed fit to serve their country, but still need to fight a war. They work in shadows, keep their secrets—and follow their hearts . . .

Helicopter pilot Kellan Blake has always hated being told what to do, so being discharged from the army for insubordination doesn’t come as much of a surprise. What does surprise him is that when he joins up with the elite, underground 11th Hour squad instead, they send him straight home. The nest of vipers that calls itself his family is the next target for the team’s tech unit, so he’ll either have to brave their traps and deceptions himself—or watch his sweet, shy friend Sabrina walk into them alone . . .

Sabrina’s no femme fatale, but since there’s no one else with the tech skills to get the info they need, she’ll put on a party dress and take one for the team. But whoever decided she should pretend to be Kellan’s new fiancée hit a little too close to home. How can she concentrate on a dangerous mission when she’s worried about giving away what she really feels for her loyal, passionate, smoking hot partner? At least she isn’t likely to blow their cover. Until she’s in the line of fire, and neither Kellan’s demons nor his heart are hers to tame . . .

You can purchase TOTAL CONTROL at:
Kensington Books 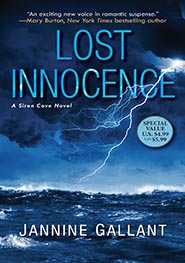 The small town of Siren Cove, Oregon, has everything you could want—and a few things you don’t . . .

Artist Nina Hutton finds a lottery ticket on the beach, stuffs the crumpled paper in her pocket—then forgets all about it. Distracted and shaken by a series of break-ins at her home, Nina turns to her handsome new neighbor for help and protection again and again.

Since the death of his wife in a drive-by shooting, Teague O’Dell has moved from the city to the small town of Siren Cove, determined that his daughter will grow up in a safe environment. But when the intriguing woman next door is plagued by a mysterious vandal, he wonders if his new home harbors unexpected dangers.

The winning lottery numbers have been revealed, and the owner will do whatever it takes to claim the prize. And the closer Nina and Teague get to each other, the closer they may get to exposing a horror that could cost them everything . . .

You can purchase LOST INNOCENCE at:
Kensington Books 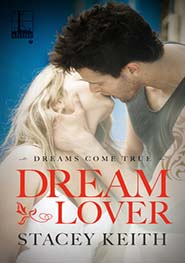 In one little town in Texas, even toeing the straight and narrow might lead you to a joyride . . .

April Roby believes in avoiding entanglements—and her beloved sisters have given her a master class in what heartbreak looks like. So, no matter who tries to fix her up, April is sticking to her thick manila folders and her frumpy beige skirts, and putting her time and energy toward helping the kids of Cuervo, Texas as a social worker. Her latest client, foul-mouthed fourteen-year-old Matthew McBride, would be enough on his own to keep two of her busy. And his big brother Brandon is a whole different type of problem.

Brandon is the kind of muscle-bound, motorcycle-riding bad boy that no well-meaning relative would ever try to shove in April’s path. He’s prickly, he’s rude, and he’s downright obstructive. But there’s something about him that makes her want to take the smirk off his face the fun way. Neither one of them is looking for a fairy-tale ending. But in Cuervo, Texas, they just might get one anyway…

You can purchase DREAM LOVER at:
Kensington Books