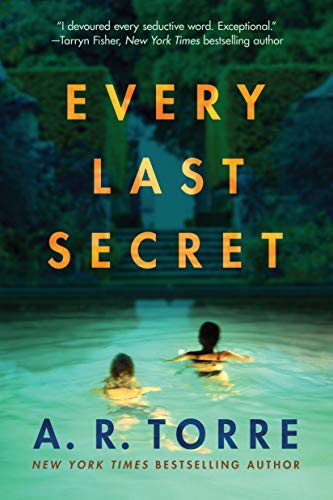 Every Last Secret by A.R. Torre

Welcome to the neighborhood. Watch your husband, watch your friends, and watch your back.

Cat Winthorpe has worked hard to get what she has: a gorgeous home; social standing; and William, her successful, handsome husband. Then a friendly new couple moves into the estate next door. While cautious, a good neighbor like Cat greets them with open arms and warm hospitality.

Neena Ryder isn’t a fellow lady of leisure. A life coach with off-the-rack dresses, personal issues, and a husband who hasn’t delivered, she’s anxious to move up in the world. This beautiful new town is a step in the right direction. It’s also making Neena aware of what she doesn’t have. Namely, William. When Neena’s infatuation escalates into obsession, it’s just a matter of eliminating a few obstacles to get the life she wants. The life next door.

As Neena’s secret fixation grows, so does her friendship with Cat. But beneath their cordial interactions is a wealth of temptations, secrets, and toxic jealousy. For both women, the desire for a perfect life can turn perfectly dangerous.

The detective was beanpole tall, with a gap in between her middle teeth that I could push a pretzel stick through. Last night she had been unattractive. Now, under the harsh overhead light, she was downright ugly.

She stayed quiet, flipping through her case folder with the speed of a tadpole. I sighed and brought the flimsy foam cup to my lips, forcing the bitter coffee down and wondering where my attorney was. It was fine, for now. I would find out as much as I could, skirt the obvious traps, and keep my mouth shut. Keeping my mouth shut was a skill I’d perfected a long time ago. It was the gossipers who got in trouble. The braggers. People like Cat Winthorpe, who couldn’t just have the perfect life. She had to throw it in your face with her casual comments, her drip of wealth. Which is why she needed to be punished. You can’t blame me for what happened. I was simply putting her in her place.

“I listened to the call you placed to 9-1-1.” The detective studied me. “It was interesting. At one point, you yawned.”

I shifted in my seat, and the handcuffs clinked together. Twisting my wrist, I tried to find a more comfortable position. I had been hoping the phone hadn’t caught that yawn. It was one of those inescapable ones that sneak up on you right in the middle of a sentence.

“Do you realize the damage that a gunshot through the mouth creates?” She flipped over a glossy image and pushed it forward with a slow and calculated hand. “The bullet passes through an enormous number of blood vessels before piercing the brain and exiting out through the back of the skull.”

I leaned over and looked at the photo without comment, unsurprised to see a large exit hole in the top of the head. Nasty stuff, but I had seen worse. A face bloated, the lips splitting open as the features swelled past recognition. The alarmed look on the face of a man you had once loved, just before he dies. The sound of his begging that still echoes in the dark recesses of my mind.

I set down the cheap coffee. “Do you have a question, or is this just your show-and-tell time?”

The woman paused, the simple gold band on her left hand stilling as she studied my face. “Mrs. Ryder, you don’t seem to understand the gravity of this situation. You are under suspicion of attempted murder.” I understood the gravity of her situation. That cheap wedding band?

Those bags under her eyes? She’d chosen the wrong path. With braces early on and a strict fitness-and-diet routine, she could have done something with her life. Been someone. Put herself in a position to enjoy the finer things in life. I focused in on her face. “Dr. Ryder,” I corrected her. She smiled, and there was something in that gesture that raised my hackles. I looked toward the wide mirror and studied my reflection, verifying that everything was in place.

My hair, freshly cut and dyed.

My skin, glowing and Botox smooth, despite the horrific lighting in this place.

My body, trim and thin underneath the designer workout gear.

My wedding ring, still in place, the large diamond glittering from my hand like a spotlight.

I had clawed my way to the top of this world, and they couldn’t take me down now. Not with the mountain of lies I’d worked so hard to construct.

“You moved to Palo Alto two years ago, is that correct?” At my silent agreement, she cleared her throat. “So, let’s start there.”

YOU CAN PURCHASE EVERY LAST SECRET AT: 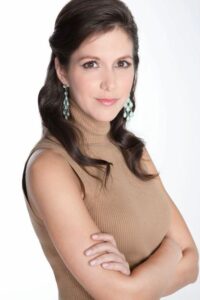 Torre has been featured in such publications as Elle and Elle UK, as well as guest-blogged for the Huffington Post and RT Book Reviews. She is also the Bedroom Blogger for Cosmopolitan.com. In 2017, her New York Times bestseller HOLLYWOOD DIRT, was released as a full-length film by PassionFlix. Torre’s novels have been translated in seventeen languages and are distributed in over thirty countries.

Torre is the creator of Alessandra Torre Ink – an authors’ community and online school with over 10,000 members. She is also the founder of INKERS CON, an annual authors conference. A self-publishing advocate, Alessandra speaks frequently to universities, conventions and author groups.

From her home in Key West, Florida, she devotes several hours each day to various writing projects and interacting with her fans on Facebook, Twitter and Pinterest. When not battling her husband at Scrabble, she chases her pet chickens, three dogs, and shoos away iguanas.