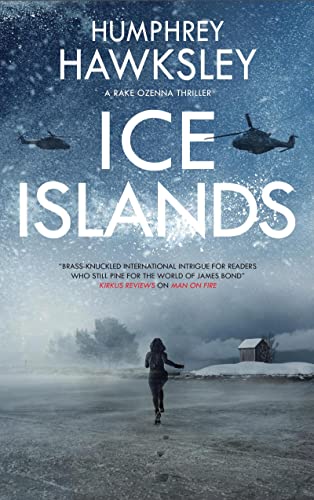 Major Rake Ozenna’s mission is simple: gain access to the Kato family – Japan’s most dangerous crime empire – and stop the threat to America. But when the secret son of the Russian leader is executed and Rake’s target, Sara Kato, is implicated in the murder, a political crisis between Russia, Japan and the US is set in motion.

It’s a race to protect Sara and earn her trust whilst escaping the inhospitable terrain of the icy Aland Islands. Meanwhile, Russia wants revenge for the murder, a catastrophic move when it is revealed that Japan is not the trusted ally America thought it was.

As Rake learns the true extent of their deadly plans, he must draw on every ounce of skill and grit to succeed. Because if he fails, it won’t just be his life at stake …the consequences will be global!

‘Hawksley’s excellent idea is to move the battleground from Eastern Europe to the Arctic north. When a maverick Russian commander decides to occupy a tiny American island in the Bering Strait, there’s only one man who can prevent the situation from escalating into a nuclear war: Rake Ozenna of the elite Eskimo Scouts’
Mail on Sunday, Thriller of the Week on MAN ON ICE

‘Humphrey Hawksley is one of only a handful of writers taking the thriller in important new directions’ – Craig Thomas, author of the MITCHELL GANT series

Humphrey Hawksley work a as a BBC foreign correspondent has taken him all over the world. He is a regular panelist and speaker and his writing has appeared in most mainstream publication such as the Guardian, The Times, Financial Times, and Yale Global.  His latest non-fiction book is Asian Waters: The Struggle Over the Asia-Pacific and the Strategy of Chinese Expansion.  Hawksley’s television documentaries include The Curse of Gold, Bitter Sweet and Aid Under Scrutiny.