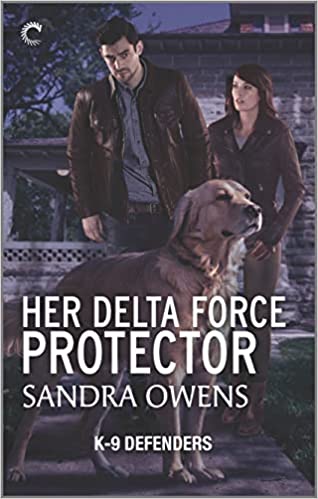 This is the second installment in the action-packed new K-9 Defenders series from romantic suspense powerhouse Sandra Owens, centering the Church brothers, Tristan, Parker, and Kade.

Everyone thinks Harper Jansen is dead.

She is not, and she wants her life back.

When Harper calls Kade Church, very much alive but terrified, he does what is programmed in his DNA: he protects. Delta Force operator Kade—and Duke, his military K-9 school flunky—have the skills to keep Harper safe.

Kade has never allowed himself to think of Harper as more than his best friend, but as they join forces to bring the men who tried to kill her to justice, long-buried feelings surface. And Duke may be a goofball and see everything as a game, but when it counts, he proves he’s more than a boot camp dropout.

Whatever it takes, they’ll save the woman Kade is falling in love with.