SNEAK PEEK: Hot for The Scot by Janice Maynard 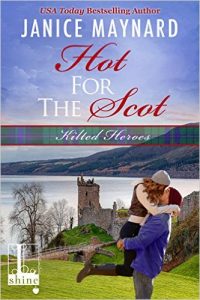 In Janice Maynard’s sweet and sexy new series, three childhood friends with a shared passion for the Outlander novels and TV show decide to travel to Scotland looking for adventure—and their very own Highland heroes…

It’s a dream come true for schoolteacher Hayley Smith. No homework to grade, no students to corral, no social media, Internet or cell phone…just a month amid the heather and rolling hills around Inverness. A brawny alpha male in a kilt is probably too much to ask for. But Hayley is in heaven ambling around Loch Ness, gazing and then…falling into the icy water, before being rescued by a strong, chivalrous local hero…

Retired soccer star Angus Munro, aka Angus the Angler, is a little insulted and a whole lot intrigued when Hayley doesn’t recognize him. How long has it been since anyone saw beyond his wealth and fame? And how long before the macho athlete and his modern-day American damsel in distress act on an attraction that could make even the misty Scottish moors sizzle with heat? Long enough, maybe, for both to figure out if this is an affair to remember…or the start of something everlasting…

“Jamie Fraser is a fictional character. Like Harry Potter or Jason Bourne. You’re not going to find him wandering around the Scottish Highlands, waiting to sweep you off your feet.”

“I know that. I’m not delusional. But at least I have a whimsical soul. You wouldn’t know a romantic moment if it smacked you in the face.”

I listened to the argument with half an ear. Willow, ever the cynic, and McKenzie, the daydreamer, had been hammering away at each other since we left King’s Cross. Though we checked out of our hotel and arrived at the train station with plenty of time to spare for our noon departure, McKenzie nearly made us late when she insisted on standing in the snaking line of tourists to get her picture taken at the Platform 9 ¾ sign. 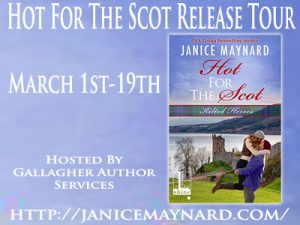 Not only was she a rabid fan of all the Outlander books, she was almost equally smitten with the world of Harry Potter. I couldn’t blame her, really. As a primary school teacher and lifelong reader, I’d been called a bookworm and a nerd more than once. My own tattered copy of Outlander was tucked inside my backpack, even though my Kindle had enough books to last me until I was old and gray.

I was neither as unique as Willow nor as sophisticated as McKenzie. Middle-of-the-road at best. With the last name Smith, the cards were stacked against me when it came to standing out. I spent my days working with women and children and my nights grading papers. My goal for this trip was to live on the edge…to seek out adventure…and to quit being so cautious. I had come to Scotland to find myself.

I suspected Willow and McKenzie had equally private goals, but they hadn’t shared them with me. We had all agreed to look for romance. Like Claire Randall, the intrepid heroine of the TV series Outlander, we yearned to find our own down-to-earth but utterly devoted Highlander.

It was a harmless fantasy.

The signposts flying past my window were poetry to me. I’d studied them on the map: Pitlochry, Gleneagle, Lindisfarne. I couldn’t wait to leave this train and plunge into the greatest adventure of my life.

Reluctantly, I drew my attention from the passing scenery and intervened before blood was shed.

“You’re both jet-lagged,” I said. “If you’re not going to enjoy the trip, at least get some sleep so you won’t be grumpy when we get to Inverness. I’m tired of listening to both of you.”

We were riding in first class, four motor coach–style seats flanking a small table, two on either side. Lunch had already been cleared away. Our snacks littered the surface between us. So far the cuisine hadn’t been all that impressive. But the food was included in our ticket price and better yet, we didn’t have to queue up at the meal counter several cars away.

In front of us sat the remnants of our third cups of tea. Or was it the fourth? I’d honestly lost count. Already, I’d made several trips to the tiny restroom at the rear of the cabin. The pleasant stewards passed up and down the aisles, pouring tea and offering cream with almost mechanical precision. At this rate, I’d be a certified Brit by the time we arrived at our destination.

Finally, in response to my schoolmarm glare, my two friends sat back and exchanged sheepish grins, making them look more sleepy than cranky.

Willow yawned. “Tell me again why we didn’t fly straight to Inverness?”

Willow wasn’t as much of a hard-ass as she liked to pretend. She had a mushy, soft center wrapped in a hard candy shell. Her life had been difficult…much more challenging than mine. I suspected her armor was only skin deep, but it gave her the illusion of being in control.

I opened my notebook. “We agreed that since we can’t actually go back in time like Claire does in Outlander, this train journey will be symbolic of our desire to go off the grid for a month. No cell phones. No Internet. No Facebook. No Twitter. You agreed, Willow.”

“Under duress,” she muttered.

“And you’re even more annoying than usual,” Willow drawled.

“Enough,” I pleaded. I knew they loved each other. I’d known these two since we all shared a preschool babysitter, my sainted mother. Although the three of us had been a handful even as children, Mom relished the fact that she had two additional daughters in Willow and McKenzie. My parents always wanted a big family, but it wasn’t in the cards.

I had heard the refrain a million times growing up: Those two girls are like sisters to you, Hayley. Don’t ever let them go.

You can purchase Hot for The Scot at:
AMAZON
BARNES & NOBLE
KOBO
GOOGLEPLAY
KENSINGTON BOOKS 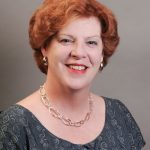 USA Today bestselling author Janice Maynard knew she loved books and writing by the time she was eight years old. But it took multiple rejections and many years of trying before she sold her first three novels. After teaching kindergarten and second grade for a number of years, Janice took a leap of faith and quit her day job. Since then she has written and sold over thirty-five books and novellas.

During a recent trip to Scotland, Janice enjoyed getting to know the “motherland”. Her grandfather’s parents emigrated from the home of bagpipes, heather, and kilts. Janice lives in east Tennessee with her husband, Charles. They love hiking, traveling, and spending time with family.

Hearing from readers is one of the best perks of the job! And you can find out more on her website.